Top 5 fintech trends to watch⁠—now, and in the future

The fintech movement is driving a rapid evolution within financial services, resulting in a new infrastructure and platform for the industry’s next generation.

Here are the top trends we expect to shape fintech this year and beyond:

Investment in fintech companies has soared in the past three years, topping $118.2 billion globally in 2021, which surpassed the previous two years combined. The average fintech company valuation skyrocketed from $17.6 million in 2019 to $77 million last year.

Sixteen fintech companies went public via a traditional initial public offering in 2021 and 21 via special purpose acquisition company transactions—these numbers will be difficult to exceed. However, even with these booming metrics, there could well be challenges ahead. Looking to the rest of 2022, we expect investors to be more discerning as regulations around public transactions evolve. The expected interest rate hikes the Fed plans for this year also point to capital not being so easy for fintech and other emerging technology companies to access. Still, we expect interest in fintech companies to remain high along with the number of capital market transactions.

Much remains to be seen, but here are the top trends we expect to shape fintech this year and beyond:

1. Embedded finance is here to stay

Big Tech has blurred industry lines and enabled the concept of embedded finance to become widespread; PitchBook estimates the market potential of embedded finance to reach $7 trillion by 2030. (Compare that to its market value of $43 billion in 2021, according to Juniper Research.) More and more, customers demand access to products and services in one centralized location, pushing companies to provide financial services products through partnerships and white-label programs.

Companies in health care, consumer products, technology, and other sectors can embed a loan, a checking account, a line of credit, or a payment option into their business model and platform. This means large-scale ecosystem disruption for many players and presents a potential opportunity to companies that focus on offering customized customer experiences. This also means it will be possible to offer distinct groups personalized services uniquely tailored to their financial situation.

2. A super app to rule all other apps

Along with the growth of embedded finance, we anticipate the rise of the “super app,” which essentially pulls together many apps with different functionalities into one ecosystem. For example, WeChat is used in Asia for messaging, payments, restaurant orders, shopping and even booking doctors’ appointments. The adoption of super apps is slower in the United States, but PayPal, Venmo, Cash App, Coinbase, Robinhood, SoFi, Chime, Affirm, and Klarna are building out their functionality. Typical functions of these super apps include QR code payments, peer-to-peer transfers, debit accounts, checking accounts, direct deposits, stock trading, crypto trading, and more. 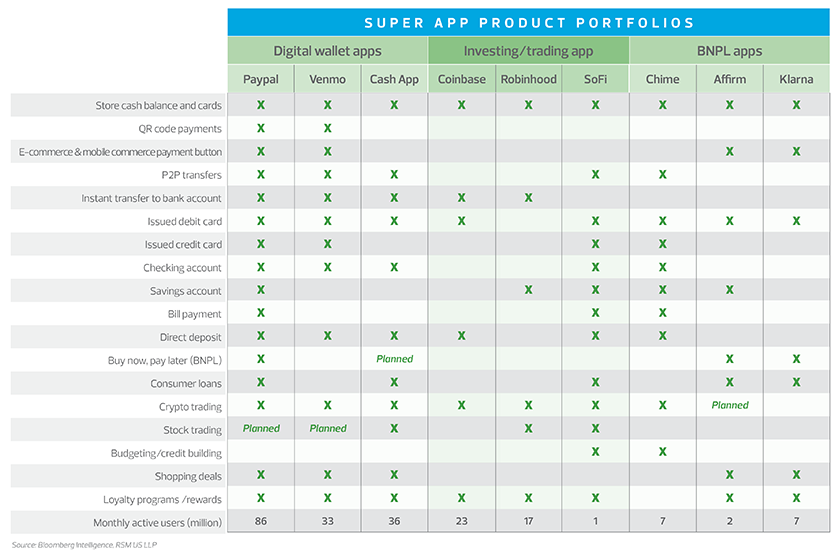 Of the $118 billion in fintech fundraising in 2021, approximately 30% went to fund blockchain and cryptocurrency projects. This percentage includes the amount of capital invested in decentralized finance (known as DeFi) platforms, which was $1.9 billion, according to The Block. While the investment is a small percentage of last year’s fintech total, DeFi has the potential not only to disrupt the financial services industry but radically transform it because of the massive structural changes it could bring.

DeFi is an alternative to the current financial system, relies on blockchain technology, is open and global, and has no need for a central governing body. Most current DeFi projects use the Ethereum network and various cryptocurrencies. By using decentralized apps, users can trade, lend, borrow and exchange assets directly with each other instead of relying on an intermediary. The net value locked in DeFi protocols, according to The Block, grew from $16 billion in 2020 to $101.4 billion in 2021, demonstrating its potential.

Digital wallets such as Apple Pay and Google Pay are becoming an increasingly popular alternative to cash, debit cards, and credit cards, and we expect this trend to continue. Digital wallets are used for 45% of e-commerce and mobile transactions, according to Bloomberg, but their use accounts for just 26% of in-person point-of-sale payments. By 2024, WorldPay expects 33% of in-person payments globally to be made using digital wallets, while the use of cash is expected to fall to 13% from 21% in the next three to four years.

As a result, we are starting to see countries strongly considering digital currency, which could set the stage to drastically reduce the use of cash. China, Mexico, and the United States have all made considerable progress in exploring or piloting such programs, which would make digital wallets more widely accepted and used in coming years.

5. Regulators are catching up to fintechs

Given the speed at which fintech innovation moves, it’s no surprise regulators have been playing catch-up for a few years now. But 2022 could be the year regulators make some headway. In the United States, for example, the Consumer Financial Protection Bureau, noting the rapid growth of buy now, pay later, opened an inquiry into five BNPL companies late in 2021 and has signalled its intent to regulate the space. Of the 18 enforcement actions issued by the CFPB in 2021, only one was issued to a fintech company, but the CFPB’s mandate to protect consumers means it’s only a matter of time before more regulation is in place.

The U.S. Securities and Exchange Commission’s chair, Gary Gensler, signalled the agency’s intent to regulate cryptocurrencies during its last investor advisory committee meeting in 2021. The acting chair of the U.S. Federal Deposit Insurance Corp. has similarly noted that the risks posed by crypto-assets require that the agency prioritize regulation of such assets in 2022. And this January, Canada’s acting comptroller of the currency Michael J. Hsu noted that crypto has gone mainstream and will require a “coordinated and collaborative regulatory approach.”

Other global agencies have also begun evaluating the use of some technology, like artificial intelligence and machine learning, in financial services.

Canada has also experienced some noteworthy developments within the fintech regulatory landscape. Open banking continues to make headway in Canada, with federal plans released in August 2021 to implement an open banking system by 2023.

Crypto regulatory scrutiny also strengthened, with the Canadian Securities Administrators (CSA) and the Investment Industry Regulatory Organization of Canada stating in March 2021 that crypto-assets may be subject to securities legislation. The jointly issued consultation paper from the agencies outlined a proposed framework for crypto-asset trading platforms, and several staff notices provided further guidance on crypto-asset regulations, from facilitating the trading of such assets to the recognition of utility tokens.

On Aug. 15, the CSA issued a press release providing an important update to crypto-asset trading platforms currently operating in Canada that are not yet registered. The CSA now expects these platforms to provide a pre-registration undertaking to their principal regulator to continue operations while their application is under review. In addition, on Aug. 18, the Office of the Superintendent of Financial Institutions announced an interim approach that provides further guidance on the regulatory capital and liquidity treatment of crypto-asset holdings.

On lending, the Government of Ontario released a report in January 2021 on the regulation of high-cost credit agreements and alternative financial services, including payday loans, instalment loans, and lines of credit. The report detailed several proposals being considered to improve the regulation of high-cost credit and alternative financial services agreements.

There are a number of other forces at play shaping the fintech space, including automation; artificial intelligence; environmental, social, and governance issues; and workforce challenges. But we’ll be watching the five major trends above most closely as the year continues.

Swipe to view all