The Tax on Split Income (TOSI) dramatically impacts family tax planning for business owners. These rules are both complex and vague, leading to uncertainty about how the CRA will exercise its considerable discretion in decision making. A recent CRA interpretation provides some clarification on one of the many particularities of the rules: active engagement in an “excluded business” can take place in any five, even non-consecutive, previous years. 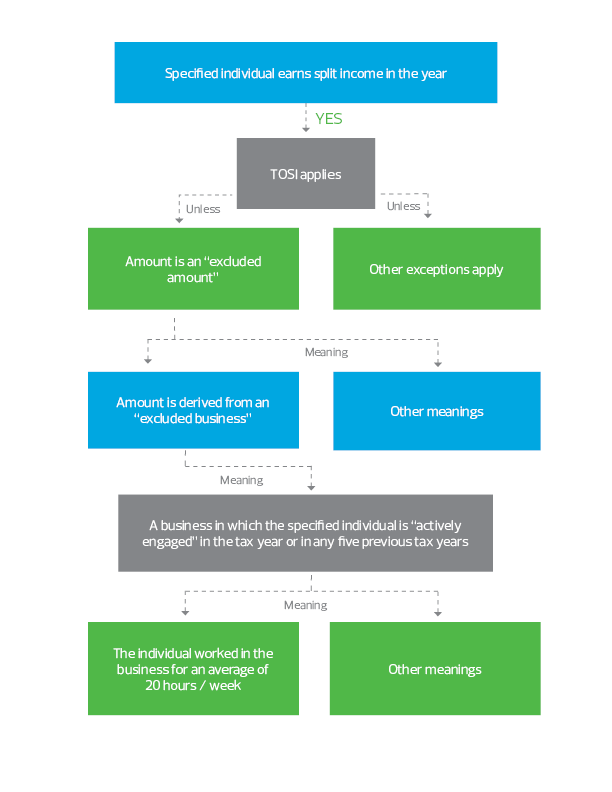 However, as of January, 2018, the TOSI rules limit opportunities for income splitting. Unless an exception applies, income or taxable capital gains received by a “specified individual” from a “related business” will be taxed at the highest marginal rate. A specified individual is essentially someone who is a resident in Canada at year-end (with some extra rules for those under 18). A related business is generally one in which an immediate family member (spouse, parent, child or sibling) is involved at any time during the year. The expression can also include a business of a partnership or a corporation in which a family member owns an interest.

There are a number of exceptions to the TOSI rules. Several of them focus on allowing for a reasonable return to the specified individual in recognition of her actual contributions to the business. One such exception is the excluded business rule: where the specified individual is 18 years old and has been actively engaged in the business on a regular, continuous and substantial basis either in that year or in any five previous years, she may qualify for the excluded business exception to TOSI.

An individual is deemed to be actively engaged in the business if she works at least an average of 20 hours per week during the portion of the year in which the business operates. Beyond this deeming rule, exactly what constitutes regular, continuous and substantial involvement in the business is not entirely clear and a fact-specific determination is needed.

Some explanatory guidance on the active engagement criterion has been provided. The equivalent of 20 hours per week can be accumulated over a compressed time period to accommodate time off of work for reasons such as vacation, illness or birth of a child. Further, where the 20-hour bright-line test cannot be met for situations including parental or sick leave, CRA will look at the factual context of the individual’s involvement in the business to determine if it meets the “regular, continuous and substantial basis” test. Engagement in management and current activities will raise the likelihood that the individual will be considered to have satisfied the test.

Recent Interpretation of the “in any five previous years” test

In CRA Views 2018-0783741E5, CRA considered the case of Ms. B., a woman who worked 40 hours per week for a private company between 2001 and 2006.  Ms. B. subsequently married the owner and sole shareholder of that company in 2018 and had not worked for the company in the intervening 11 years.   Both Ms. B. and her new husband were Canadian residents.

CRA noted that any dividend income that Ms. B. receives from the company in 2019 would be subject to the TOSI rules unless she qualifies for the excluded business exception on the basis of her previous five years’ employment.

In finding that Ms. B.’s prior five years service met the test for engagement on a regular, continuous and substantial basis, CRA noted that it will look at the facts of each situation. In addition to the bright-line test of 20 hours per week, relevant factors could include an assessment of the time, work and energy that the individual devotes to the business. Additional factors that will increase the likelihood of meeting the test include demonstrated involvement in management and current activities of the organization, as well as contributions integral to the success of the business. CRA affirmed that the five years of engagement did not need to be consecutive, nor did the specified individual need to be related to the business owner at the time the services were performed.

Get our tax insights in your inbox
RSM tax professionals stay on top of changing legislation and provide perspective to help you keep your business running smoothly.
Choose your subscriptions