For middle market manufacturers, opportunity is in the cloud

Cloud platforms are foundational to the smart manufacturing revolution

For many middle market manufacturers, making the shift from on-premises information technology systems to cloud-based IT operations can seem daunting. But because cloud computing has lowered the barriers organizations may have previously faced in the process of becoming a data-driven enterprise, cloud platforms also hold enormous possibility to transform manufacturers’ IT systems.

Cloud computing allows data to be stored off-premises but still be accessible from anywhere. For manufacturers, this has huge implications for the reams of data generated from machines and production systems, product tracking and other functions across the supply chain. As manufacturers increasingly automate operations, data will become even more crucial. Using a cloud platform can streamline the way data is stored and managed.

“While some devices and equipment will continue to live on-premise, manufacturers are increasingly realizing value by deploying devices out in the market, and in the hands of their customers and suppliers.”

“The big tech players are making their new investments in the cloud,” says Jeff Marker, RSM principal and enterprise resource planning (ERP) solution architect. “While some devices and equipment will continue to live on-premise, manufacturers are increasingly realizing value by deploying devices out in the market, and in the hands of their customers and suppliers.”

Manufacturing leadership teams need to understand that their company can make this transition to the cloud incrementally, function by function, for various aspects of operation such as the ERP platform, supply chain integration or manufacturing processes. By their very nature, cloud technologies allow companies to make piecemeal progress in shifting away from on-premises IT infrastructure systems.

“Companies don’t need to redo everything to start taking advantage of the cloud,” Marker says. “It’s about processes you’re looking to improve, rather than replacing everything you have all at once.”

Executive teams may have security concerns about cloud services. In many cases, however, data is less secure on-premises at a given company’s operations site than it is in the cloud; hackers can gain access when systems aren’t patched and maintained on a regular, often daily basis. Manufacturing companies run higher risks of falling behind their competition if they don’t make investments in the cloud now.

"A small or middle market company that has limited money to invest won’t do a better job than Microsoft or other cloud providers” when it comes to securely storing data, says Marker. Companies shouldn’t let the fear of change prevent them from seeking out more efficient, flexible and secure cloud-based platforms.

Cloud capabilities also allow for high availability of data. If a manufacturer stores its information at a server on-site and that server goes down, the inability to access that data through other routes could hamper the company’s operations for as long as the outage lasts. If that manufacturer uses a cloud platform to store its data, however, the reach of that platform’s capabilities makes downtime less of an issue, ultimately making high availability more feasible. That level of availability can be tough and expensive for middle market manufacturers to achieve on their own, whereas most cloud providers have multiple data centers, geographically dispersed.

Data from RSM US shows that a fairly consistent number of middle market executives are using the cloud to increase data security. In fact, 40% of respondents to the RSM US Middle Market Business Index 2021 Cybersecurity Special Report detailed moving or migrating data to the cloud in the past year due to security concerns, only a 2% reduction from the previous year’s data.

“While middle market movement to the cloud for enhanced security may have stalled slightly, the overwhelming majority of companies that are utilizing the cloud are certainly seeing results,” according to the report. “Among middle market executives reporting moving data to the cloud for security concerns, 88% believe the data residing in the cloud is more secure. This actually represents a 2% drop from last year’s survey, but 54% feel that their data in the cloud is much more secure, the highest level in survey history.”

Along with improved security, cloud technologies give manufacturers enormous flexibility in how they can get the most value from their data. Companies can use whatever amount of data computing and storage they may need at a given time but also can scale up as they grow and develop. That also means businesses can manage their costs more effectively.

“As companies think about smart manufacturing, which is huge and all over the place, they maybe have avoided the journey,” says RSM principal and enterprise account leader Ron Beck. “Leveraging the cloud allows them to start at their own pace.”

Manufacturing executives need to understand that cloud platforms are foundational to the smart manufacturing revolution. The extent to which manufacturers can take advantage of advanced, Industry 4.0 technologies—such as artificial intelligence, machine learning, smart devices and digital twins—will depend on the extent to which they have embraced the cloud.

Companies need to take action now to be able to adopt these technologies if they want to stay competitive, especially given that levels of Industry 4.0 adoption increased across almost all business functions over the last year, according to the Manufacturing Leadership Council’s 2021 Factories of the Future survey. We expect competition in this area to keep heating up; the MLC found that 41% of manufacturers will continue to accelerate adoption of Industry 4.0 technologies in light of the pandemic.

"The cloud is really the enabler," says Jason Alexander, RSM principal and industrials senior analyst. “If middle market firms want to be able to innovate using today’s technology, that cloud infrastructure is like a baseline and foundational component to that.”

The shift to the cloud can be an unwieldy endeavor without proper planning. Executives should create a transformation road map to identify their current phase of adoption, and to decide how they want to accelerate that adoption in the future. 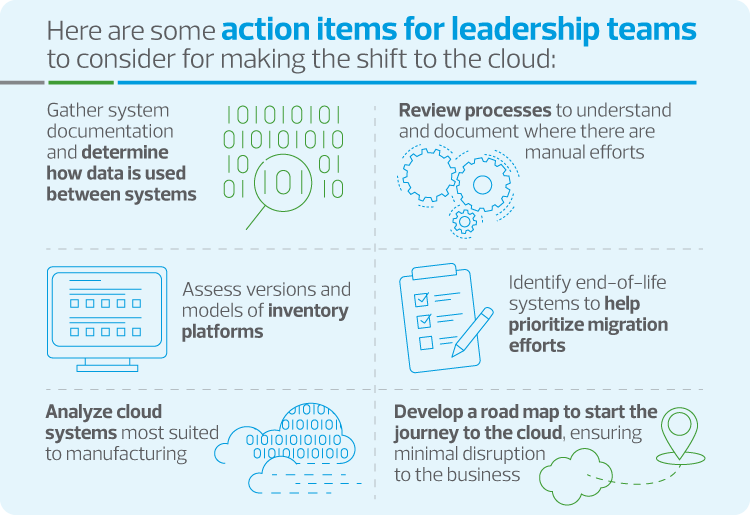 Ultimately, manufacturing executives need to understand that migrating to the cloud is more cost-efficient, scalable and secure than maintaining on-premises data and IT infrastructure. Embracing this shift will enable a company to more quickly transform into a truly data-driven organization.