Public offerings have come to a near standstill and private markets have cooled, but opportunities still exist in the sector.

For established companies, now is the time to invest and build a competitive advantage to prepare for future fundraising.

Capital markets are unsettled and uncertain in the biopharma sector.

Many recent headlines involving the biopharma sector paint a bleak picture. Looking only at the past few months of public and private financing and stock prices, it would be easy to conclude that the industry faces major headwinds. However, despite the difficulties facing companies that need to raise capital right now, the industry is still quite healthy overall. In this biopharma outlook we examine current challenges, while also highlighting reasons for optimism, including access to opportunities that did not exist a year ago.

Without question, the capital markets, both public and private, have cooled substantially relative to 2020 and 2021. However, it is important to keep in mind that those were record years for life sciences investments. 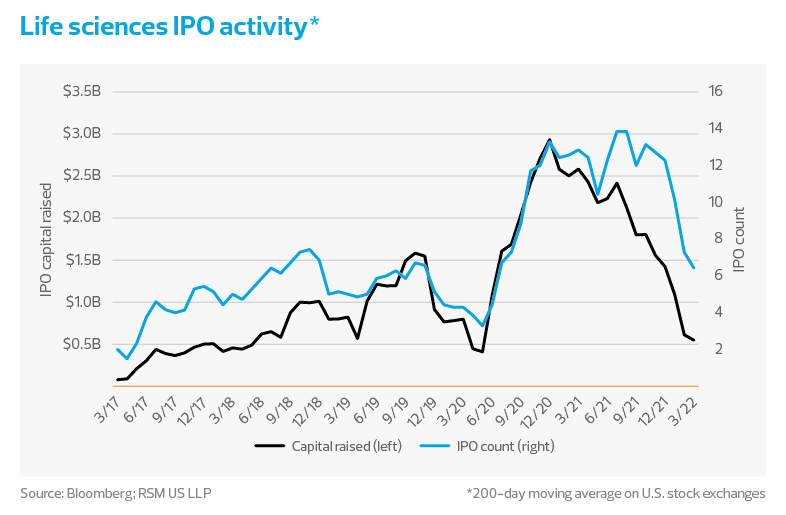 While initial public offerings of life sciences companies have slowed, reflecting a downward IPO trend across the broader economy, the biopharma sector has remained attractive for investors with a long-term view. As a percentage of all non-special purpose acquisition company IPOs in the United States, biopharma IPOs have stabilized near the pre-pandemic average of 34%. However, valuations have fallen from their peaks in Dec 2018 to only 8% of all capital raised in IPOs.

Given the slow year so far for all types of fundraising, including private equity and venture capital, an uptick in mergers and acquisitions activity in life sciences might be expected—but deal volume has fallen steadily for the past 12 months, with no immediate sign of a turnaround.

If life sciences companies are not raising new capital or being acquired, how exactly are they weathering higher prices and labor shortages? The answer lies in the industry’s astonishing success in raising capital in 2020 and 2021. According to RSM’s analysis of PitchBook data, the total capital raised in 2020 and 2021 is greater than the sum of capital raised in the four years prior to that. Many companies have the cash runway to continue development without the pressure to immediately raise additional capital. 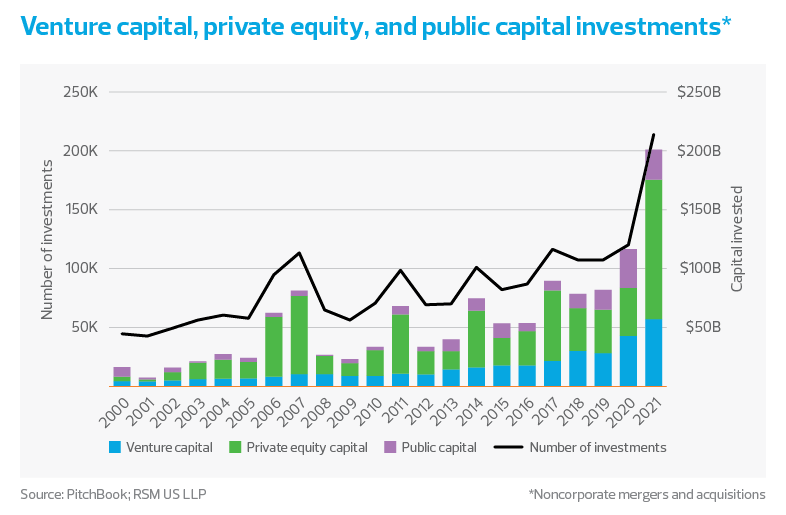 Deploying capital in the current environment

In the current capital environment, it can be tempting to aggressively reduce spending because of uncertainty surrounding when financing will next be available on agreeable terms. However, for biopharmas without commercialized products, reduced spending is likely not a viable option, and current data doesn’t show it happening. Instead, companies need to focus on deploying capital in ways that will maximize short-term impact while also differentiating them for future capital raises.

Biopharmas will need to show continued progress in clinical development when raising capital again becomes an option. As highlighted in our previous outlook, the volume of phase 3 clinical trial starts in recent months has remained in line with historic trends. Since trial costs are often the largest cost for biopharmas, this data indicates that reduced funding and depressed stock prices are not slowing down investment at established companies—favorable news for this sector in terms of funding.

One option for growing clinical-stage companies to differentiate themselves in the market is to adopt new technologies in their trials. The pandemic years of 2020 and 2021 saw a marked increase in virtual and hybrid trials. However, a study by the Society for Clinical Research Sites, as reported in Clinical Leader, found that only 4% of trials were fully virtual and 16% were hybrid, while 80% were traditional. This indicates that biopharma companies have significant additional opportunity to leverage new trial approaches to differentiate their development pipeline and clinical approach from their peers’. The same survey also showed that adoption of new trial technologies is still low, with 44% of sites having used telemedicine, 43% electronic consent tools and 54% electronic patient-reported outcomes

Earlier-stage companies can also consider adopting new drug discovery tools. As reported in Nature, a traditional drug discovery process can take four to five years to identify a candidate; artificial intelligence-powered tools can do this in as little as eight months. These tools can quickly identify 10 to 20 promising candidates that can then be synthesized and tested in the lab. Although these tools and services require significant investment, the reduction in development time could allow an early-stage company to quickly advance out of the lab and into the clinic. 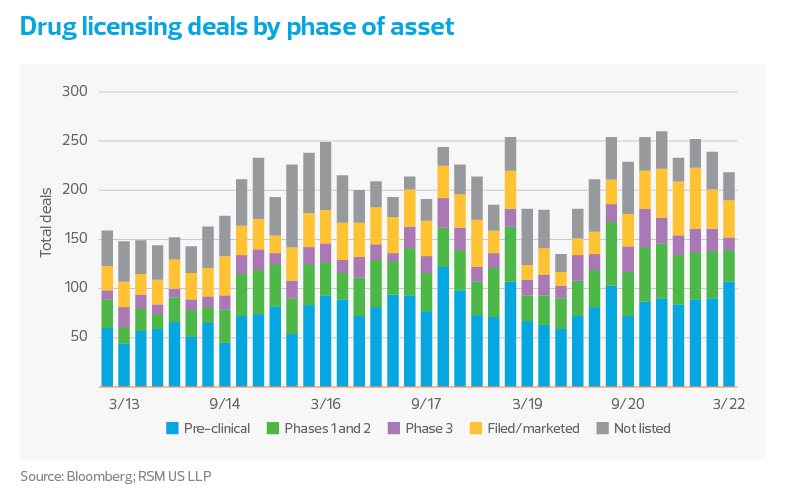 Taking all the data into consideration, the biopharma sector seems healthy overall. For established and growth-inclined companies, now is the time to invest and build a competitive advantage to position the business for future fundraising on their terms when capital markets open up again.