Oil and gas prices have played a big role in Canada's recent surge in inflation. While the headline inflation number stands at 5.7 per cent, inflation excluding energy is noticeably lower at 4.4 per cent and excluding only gasoline is at 4.7 per cent.

The high oil prices have come about in large part because of geopolitical conditions, namely Russia's war against Ukraine, which add to global economic uncertainty. These factors have had a profound impact on Canada's economy, whether it's lower-income households feeling the pinch, businesses contending with shrinking profit margins, or slowing economic growth.

But these factors aren't the only reason for higher prices at the pump. In 2019, the federal government adopted a carbon tax, which will accelerate year by year until 2030. Today it stands at $50 per ton, on its way to $170 per ton in 2030.

It's designed to be a market solution to a global problem, and has the potential to help Canadian consumers and businesses transition from the boom-and-bust of fluctuating oil and gas prices toward a more sustainable economy based on renewable energy.

The origins of the current energy shock go back before the war in Ukraine. Low production of oil in 2020 contributed to shortages of supplies last year just as the economy reopened and demand surged. Then Russia's invasion of Ukraine caused the largest supply shock to the global oil markets since the 1970s, sending oil prices skyrocketing and with possible further increases ahead.

If a ban on Russian oil occurs in Western Europe -
a distinct possibility - oil prices are bound to reach
new heights.

But the federal carbon tax remains in the background.

The tax increased by 25 per cent on April 1 from $40 to $50 per ton, which works out to about 11 cents per litre at the pump. It is scheduled to increase annually by $15 per year starting next year until it reaches the $170 per ton level in 2030. That rate translates to 38 cents per litre at the pump. And that doesn't include the taxes adopted by some provinces, which have either their own carbon tax or other cap-and-trade programs similar to those of the federal government.

In the end, consumers will pay more per litre of gas, regardless of what happens with the global oil supply.

Impact on the economy

It all shows up in higher prices for a variety of goods and services. Not only do consumers pay more at the pump, but businesses also pay more to transport their goods. This, in turn, translates into higher food costs. At the same time, the price of natural gas, which is a major source of home heating fuel in Canada, also soared this past winter.

This increase hurts all consumers, especially those on fixed incomes and those in lower-income brackets because they spend a larger percentage of their income on fuel and food.

When households have to spend a larger portion of their income on fuel and food, they must cut discretionary spending, which lowers consumer demand and can thwart economic growth.

This is where the carbon tax comes in. It is designed to make carbon emissions expensive, which encourages consumers to use less fossil fuel and switch to non-carbon-intensive alternatives. As economists like to say, the solution for high prices is high prices.

To an extent, the current supply shock is helping to make this happen, and consumers are making the switch in the face of high prices. For example, the demand for electric vehicles is outstripping supply and is rising faster than demand for gas vehicles, as the math increasingly favours EV ownership.

But for the most part, oil consumption has not decreased. Instead of turning toward renewables, many consumers continue to pay more for gasoline and for natural gas because they lack readily accessible alternatives.

In fact, the share of renewables in Canada's total electricity production and consumption increased only marginally between 2016 and 2022, even though the cost of renewables fell and fossil fuels increased. 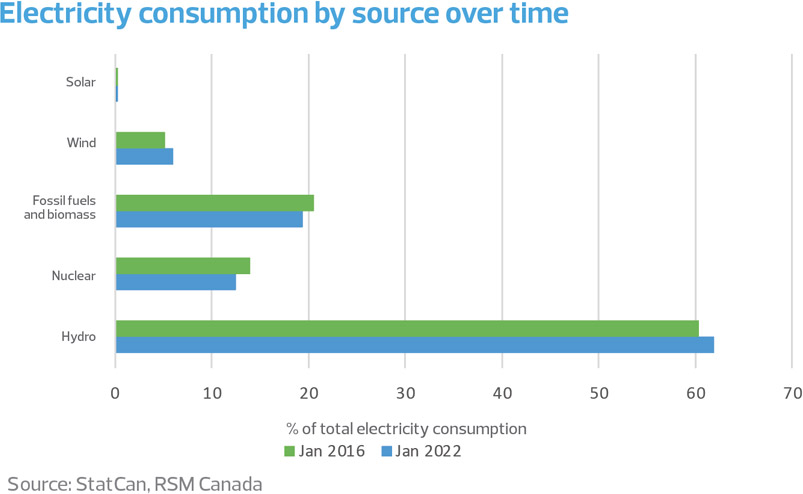 That's because demand for oil and gas is largely inelastic, which means that even when prices increase by a lot, consumption decreases by only a little because it is difficult to reduce use in the short run. And as of now, it is also difficult to switch to alternatives that could be cheaper, including renewables.

Installing solar panels or purchasing an EV is hardly an easy switch like buying generic flour over a branded product at the supermarket when prices go up. Rather, these are decisions made only once in many years and require substantial consideration and investment from the consumers. The result is that for now, many consumers are left paying high prices to fill their cars and heat their homes.

The carbon tax is not the only way to help move the Canadian economy away from volatile oil and gas prices. There are other approaches as well:

But these solutions require more than just a mandate; they require incentives as well to change behaviour among consumers and businesses.

Already, there are some incentives outlined in this year's federal budget intended to help reach this goal, including increases in EV rebates, the development of clean electricity projects and the financing of grid modernization projects.

Even before these measures, investments in the energy transition have been rising. But only when charging an EV becomes as easy as filling up the tank at a gas station or when heating a home from renewable sources is as easy as drawing on natural gas will the vast majority of consumers switch and become independent of the rise and fall of fossil fuel prices.

There is no denying that the recent spike in energy prices benefit the Canadian economy in certain sectors even as consumers feel the pinch. But with carbon taxes scheduled to increase every year, it becomes more critical for consumers to rely less on fossil fuels.

To achieve this transition, it is not enough simply to hit consumers with the stick of carbon taxes. Governments also need to provide the carrot of encouraging a switch by offering incentives that make the energy transition quick, affordable and seamless.

In a few years, consumers whose electricity use is derived entirely from renewable sources will be minimally affected by the fluctuation of global oil prices because they will consume almost no fossil fuel. And there is no better price protection than that.