Expect Trudeau and the Liberals to continue their activist approach

The election is now over and nothing has really changed. The Liberals still control a minority government, which can be shored up by either the New Democratic Party or Bloc Quebecois. Prime Minister Justin Trudeau will be thinking more and more about his legacy given that he will not likely be running in the next election. 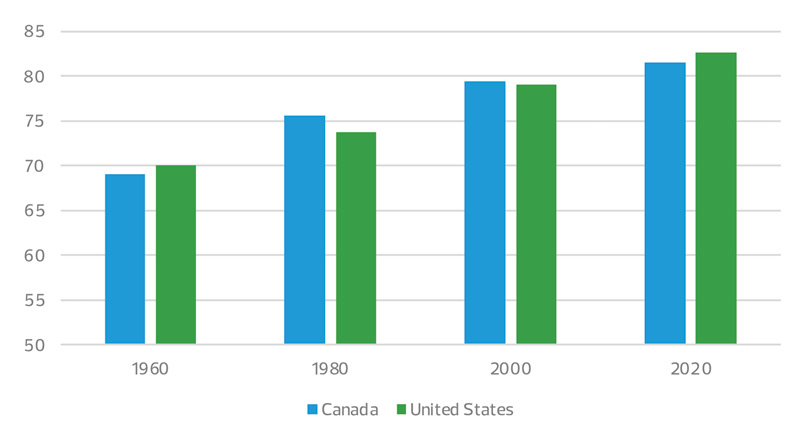 The Conservatives lost one seat and will form the official opposition. Their leader, Erin O'Toole, failed to make any headway in the vote-rich greater Toronto area despite being from the region and putting forward a rather progressive agenda. The Conservatives also lost seats in the Vancouver region. They clearly have a problem with urban and suburban voters and this is a constituency they cannot ignore. Canada's urbanization rate is among the largest in the G7 and has been growing. In 2020, nearly 82 per cent of Canadians lived in urban areas. We will see if O'Toole and his more moderate tone will continue.

Nothing much changed for the NDP either. Yet again it failed to win any seat in the greater Toronto area and could not replicate the success it had in Quebec during the Orange Wave in 2011.

On the other hand, the NDP will have an opportunity to move forward on certain aspects of its agenda, but its ability to do so may be limited in the short term. Nevertheless, there is a lot in the Liberals agenda the NDP will be able to get behind.

One thing that changed was at the fringes of the political spectrum. The People's Party of Canada had an impressive showing despite not winning any seats in parliament. Its share of the popular vote increased to 5 per cent and potentially played spoiler for the Conservatives in a number of ridings across the country.

Canada has had a robust economic recovery despite a setback in the second quarter. Vaccination rates are quite high, and in the largest provinces the rates are impressive. In Ontario and Quebec, 70.1 per cent and 73.4 per cent of the total population is fully vaccinated, respectively, as of Sept. 27. These numbers are set to climb with the vaccine rolling out to children 12 and older and with the imposition of vaccine passports and other mandates. Canada has a pathway to achieve the 80 per cent to 90 per cent vaccination rate public health officials have been calling for.

The federal government's strategy to fight the pandemic has been a combination of public health measures, substantial income and business support programs, and other measures targeted at groups that have been hit the hardest.

Like other countries, Canada is weaning the economy off support programs like the Canada Emergency Wage Subsidy (CEWS).

Employees supported by CEWS and CEWS subsidy rate by period 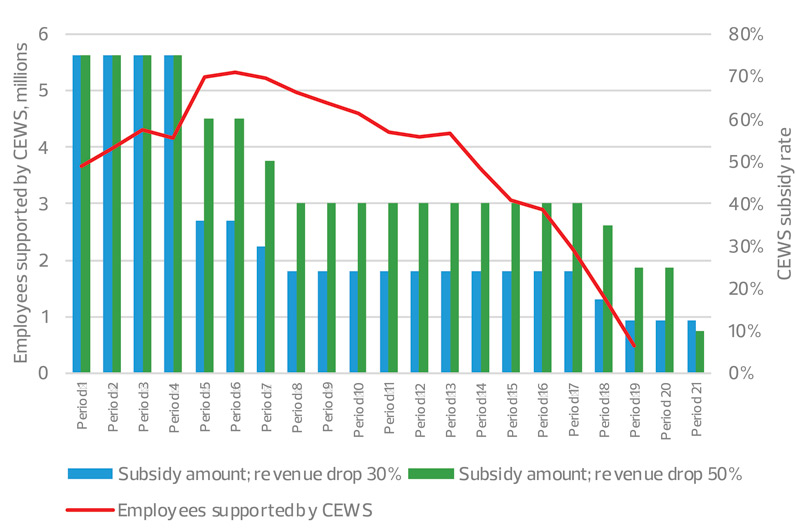 During Period 6 (August 2020), 5.3 million employees were supported by CEWS. A subsidy rate of 60 per cent was provided to organizations that could show their revenues had decreased by 50 per cent during the period. A 36 per cent subsidy was provided to companies with a revenue decrease of 30 per cent.

Over time, employees supported by CEWS have decreased as has the subsidy rate. During Period 19 (August 2021), CEWS supported fewer than 500,000 employees and the average subsidy rate decreased to 25 per cent for organizations that experienced a 50 per cent decline in revenues. Employment recovered to near pre-pandemic levels during this period, showing that aggregate demand and business revenues had also recovered, which disqualified them from obtaining CEWS. 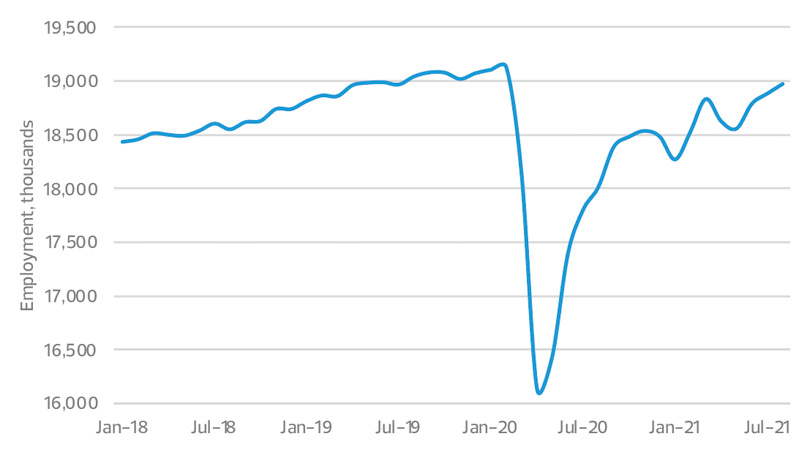 Still, many businesses are still receiving subsidies for nearly half a million Canadian employees. The first job of the new government will be to figure out what to do with the businesses that have yet to fully recover.

During the campaign, Trudeau said that he was looking to "finish the fight" against the pandemic, which will involve more targeted supports to these businesses including programs like the Canada Recovery Hiring Program subsidy for incremental wages paid compared to the reference period for qualifying businesses.
CRHP is set to expire Nov. 20, and one goal of the program is to support existing companies that have yet to recover from the pandemic and to encourage working-age Canadians to get back into the labour force through potentially higher wages.

Addressing declining labour force participation rates and labour shortages will become a more acute problem over the next year. We note a significant increase in job vacancies from the first quarter to the second quarter, vacancies increased from 550,000 to 730,000. Finding ways to get people back into the labour force will be critical to ensuring a full recovery.

The last part of the Liberals pandemic plan is what Trudeau has referred to as building back better. It is a catch-all term that means different things to different people. But it acknowledges the deep divisions in Canada's culture and economy exposed by the pandemic, and speaks to a more activist role for the state to address income inequalities, increase resilience and improve environmental outcomes.

Although Trudeau did not win a majority government , he will most likely have a free hand to govern as if he had one in the short term given that none of the other political parties will want to go back to the polls anytime soon.

We expect the Trudeau government to move quickly on the first stages of the national child care program, which was announced before the election and became a point of differentiation with the Conservatives. The program was one of the key reasons why the Conservatives were unable break into urban regions.

The full program, which promises $10 per day for child care, will take time to implement, but some financial support is expected in the short term. In Quebec, where a $10 per day program has existed for a long time, labour force participation rates for women are among the highest in North America and exceed the participation rates for men.
Getting more women into the labour force in the short term could help address some of the worker shortages that threaten to choke the recovery. Doing so could also generate broader socioeconomic benefits.

Meeting Canada's climate change objectives is another important objective, and the Liberal government has made progress from a policy perspective. Independent experts have praised the Liberals plan for its ability to meet Canada's targets on the Paris climate agreement and its cost-effectiveness.

We expect Trudeau to go further and accelerate Canada's climate change plan, which will include industrial policy-related actions that encourage the development of green industries and decarbonize high-polluting industries.

This could include a range of actions and investments including those related to supporting green energy projects, electric vehicle production along with associated infrastructure, carbon capture and storage, public transit, green and blue hydrogen, and small nuclear reactors.

Canada's carbon tax, which will increase to $170 per tonne by 2030, will create the foundation to encourage the development of these projects as will additional government incentives. If Trudeau can continue to set Canada on a path to meet its climate change objectives, that would cement his legacy.

Paying for the programs

But who is going to pay for all of this? The Liberals have proposed additional taxes on the largest financial institutions and insurance companies, the establishment of a minimum personal tax rule for people at the highest brackets, additional luxury taxes, and other measures. The parliamentary budget officer estimates that these measures would generate $8.2 billion by 2025-26, which is not nearly enough to pay for all additional proposed spending.

The Liberals are counting on robust economic growth to keep the debt-to-GDP ratio in line. But new spending proposed by the Liberals does not address some of the main items that could move the needle on enhancing Canada's productivity.

The federal government will move quickly to the next phase of the recovery, one that is focused on addressing the dislocations caused by the pandemic. We expect the government to continue its activist role in the economy. Despite not winning a majority, the Liberals will govern as if they have one in the short term. In the end, this may have been the point of the early election.