How to move past its dependence on the U.S.

Ever since Joe Biden won the U.S. presidential race and his administration took over in January, Canadian officials have held out hope for an easing in trade tensions with the United States. Whether hoping for a broad reduction in tariffs imposed under Biden’s predecessor, Donald Trump, or a reentry by the United States into what is now known as Comprehensive and Progressive Agreement for Trans-Pacific Partnership (CPTPP), Canada has kept a keen eye on the Biden administration’s approach to trade.

But six months into the Biden presidency, the results are coming into view. Not only have tariffs stayed in place, but in the case of lumber there has been an increase. It also appears less likely that the United States will seek to rejoin the CPTPP.

In a development hard to imagine even five years ago, China is now seeking to join the CPTPP, according to recent reports from Bloomberg. It’s surprising because a major reason for the agreement was to counter China’s rising influence.

It all leaves Canadian officials looking at the landscape on trade with a certain trepidation. Canada and the United States, after all, have generally shared a robust and balanced trading relationship that reflects a high degree of economic integration. 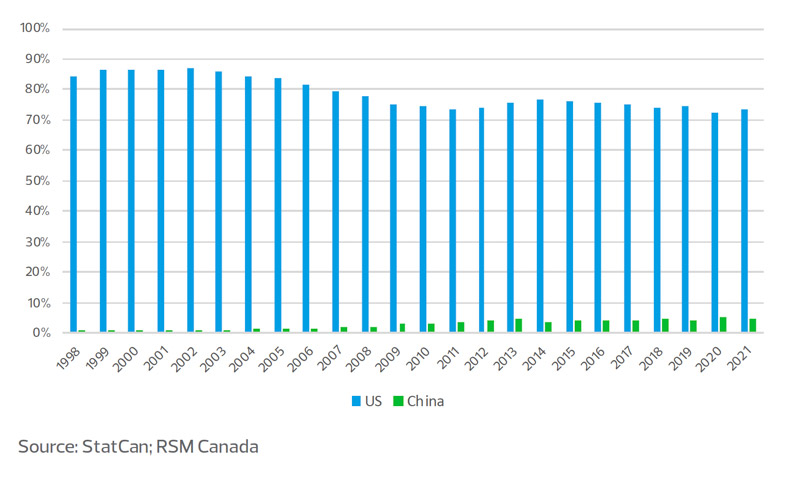 This is not to say there have not been trade frictions along the way. But the scale and intensity of these disputes increased substantially under the Trump administration and have continued under the current administration. 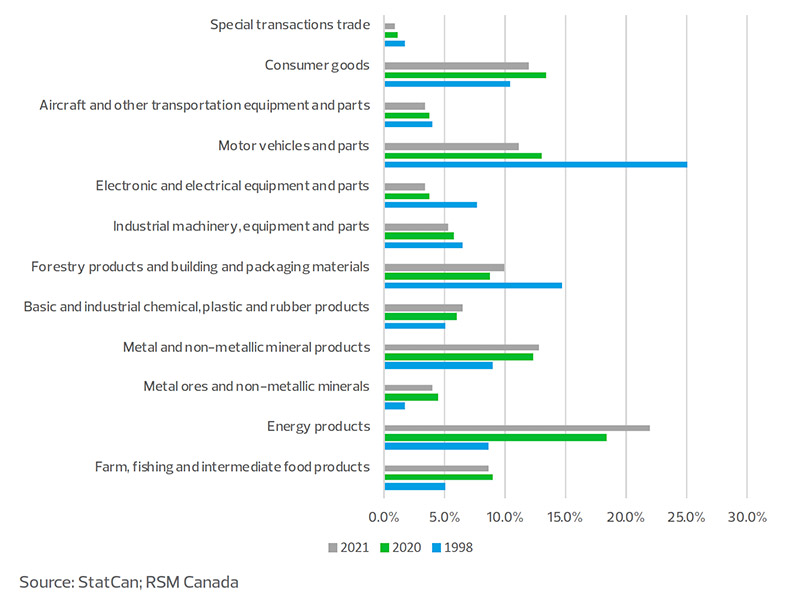 There is little sign that the Biden administration will offer any relief. The president wasted little time in cancelling the Keystone XL pipeline project, which was not too surprising because he campaigned on the issue.

MIDDLE MARKET INSIGHT: The energy sector’s importance to the Canadian economy has increased over the past several years. In the first four months of 2021, energy products accounted for 21.9 per cent of Canada’s total exports to the United States.

What has been more surprising, though, is Biden’s lack of action on the shutdown of Enbridge’s Line 5 pipeline by Michigan Governor Gretchen Whitmer despite the pipeline’s importance to the U.S. economy. Enbridge reports that shutting down Line 5 would result in a shortage of approximately 45 per cent of existing demand for gas, diesel and jet fuel in an area that includes Ohio, Pennsylvania, Michigan, Ontario and Quebec.

Adding to the uncertainty, a recent executive order by the Biden administration targeting consolidation across industries could put the pending merger of Canadian National Railway and Kansas City Southern in question. The merger held the promise of providing a more integrated rail network throughout North America for crude shipments from Canada to the Gulf of Mexico and refined products to Mexico. But the administration has expressed concern about further consolidation in the industry, saying it could raise prices on freight shipments and stymie passenger rail service.

Then there is the lumber industry. The Biden administration doubled tariffs on Canadian softwood, which was originally proposed under the Trump administration. Indeed, in 2017, Trump originally intended to impose a nearly 20 per cent tariff on Canadian softwood before settling on approximately half that rate. Forestry products, and building and packaging materials, comprised 8.7 per cent of Canada’s total exports in 2020 (9.9 per cent through in the first four months of 2021).

Interestingly, Biden imposed these tariffs when the price of lumber surged as a result of increased demand from housing construction and supply challenges wrought by the pandemic.

Considerable uncertainty exists with regard to what extent these provisions will apply to the president’s infrastructure spending package.

The return of industrial policy in the United States could very well be another area of friction in the coming years. Biden recently signed into law one of the largest industrial bills in U.S. history focused on the semiconductor and technology manufacturing sector in a bipartisan effort to remain competitive with China. But industrial policy measures like the one passed by the Senate can also act as non-tariff barriers. While Canada may not have been the target, it could be affected nonetheless if it, too, fails to keep pace with the United States.

MIDDLE MARKET INSIGHT: The return of industrial policy in the U.S. could very well be another area of friction in the coming years.

Canadian policymakers have long been concerned about Canada’s reliance on the U.S. economy, even before the original Canada-United States Free Trade Agreement was signed in 1987. Accordingly, several Canadian governments have promoted trade diversification, which has manifested itself in Canada’s aggressiveness in negotiating and signing free trade agreements and tapping into the fast-growing Asia-Pacific region, namely China. 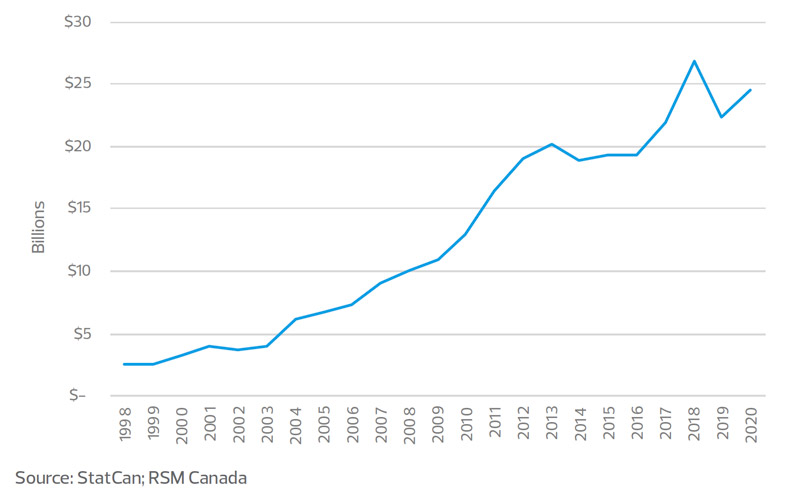 Canada’s success in this regard is mixed. Exports have increased substantially, by a factor of 12, but China still comprises a small share of Canada’s exports despite being the second-largest economy in the world. The Chinese economy has grown faster during this period. In other words, Canada has not kept pace with China’s economic growth.

At a strategic level, Canada has pursued a trade strategy focused on the agri-food sector and tapping into China’s consumer market. The share of exports of consumer goods increased from 5.8 per cent to 11.9 per cent from 1998 to 2020, but agricultural products decreased from 34 per cent to 28.5 per cent. The trajectory of Canada-China relations is also trending in a direction that could result in several other trade disputes, and growth has decelerated markedly in the past several years.

Canada is between a rock and hard place. Its principal trading partner is increasingly viewing international trade in mercantilist terms as a result of domestic pressures, and its strategy to diversify its trade has been mixed at best.

As Canada’s trade frictions with the United States rise, its strategy to diversify beyond its neighbor to the south has been mixed at best.

Part of the solution is perhaps to focus on addressing inefficiencies internally. The International Monetary Fund reports that interprovincial trade barriers cost the Canadian economy approximately 4 per cent of annual gross domestic product and generate nearly $20 billion in additional tax revenue. To put that number into context, $20 billion of additional tax revenue could more than pay for the federal government’s share of the new national child care program announced in the last budget. Of course, interprovincial trade is a highly political issue and one that will require expending a high amount of political capital. In the end, though, Canada really may not have a choice.