Bank of Canada to remain accommodative

According to the RSM Canada Financial Conditions Index

The Bank of Canada is maintaining its overnight target rate of 25 per cent and has stated that it will retain its current policy of accommodation for as long as necessary to ensure its inflation target is sustainably achieved.

Expectations are that the effects of COVID-19 will have dampened economic growth during the first quarter, even as a successful distribution of vaccines is creating the conditions for a broad-based economic recovery this year.

In addition, an unemployment rate of 7.5 per cent implies a labour market with a long road back to full employment.

With an inflation rate near the bottom of the central bank’s target range of 1 per cent to 3 per cent, implying a lack of demand, the Bank of Canada is going to be patient on the path of monetary policy as the economy heals.

That said, during March, our RSM Canada Financial Conditions Index reached as high as 1.5 standard deviations above neutral before retreating to 1.0 standard deviation as oil prices came off their highs. That implies that financial conditions are conducive to economic activity and solid recovery this year.

Excluding oil and commodity prices, the index stands just above neutral. For this reason, the Bank of Canada should remain accommodative to ensure that the improvement in the energy-based economy is matched by that in the domestic real economy. 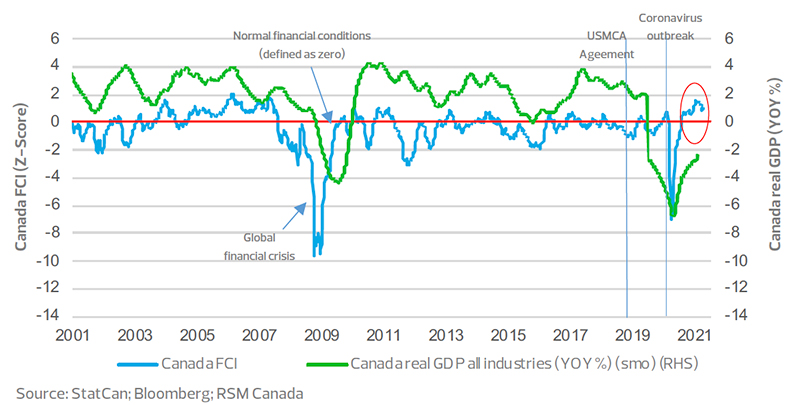 Containment of the pandemic among Canada’s major trading partners and rising expectations for global growth and infrastructure investment point to an economic revival in the near term.

Since the pandemic began, the Bank of Canada has worked to maintain liquidity in the money markets necessary for day-to-day commerce, and to incentivize investment by suppressing long-term interest rates, which lowers the cost of capital. This is evident in the normalization of financial conditions that began last summer.

Because central banks have determined that monetary policy is transmitted to the economy via financial conditions, we have created the RSM Canada Financial Conditions Index to measure the degree of risk and accommodation priced into financial assets.

That index points to improved risk appetite as the economy emerges from its yearlong slumber.

Because of the increase in the price of crude oil over several months, the degree of financial accommodation at one point looked to be approaching levels that might otherwise suggest an asset bubble.

Aside from increases in commodity prices and crude oil, financial conditions are stuck in neutral, which is neither cause for alarm or complacency.

In ordinary times, we might expect the Bank of Canada to begin applying the brakes on an overheating economy and begin raising interest rates. But these are not normal times, and the current conditions do not imply that a financial bubble has formed.

Because of the role of resources in Canada’s economy and in the value of the Canadian dollar—similar to Australia and New Zealand—we included commodity prices in our RSM Canada Financial Conditions Index. And though we would expect commodity prices to rise along with the uptrend in demand during an economic recovery, there has been an exogenous factor during this business cycle.

Crude oil production cuts by OPEC were introduced in April 2020 as the demand for energy plummeted during the economic shutdown and then continued as consumers reduced travel and cut down on ordinary driving routines.

More recently, OPEC agreed among itself to continue limiting production until the global economic recovery and increased demand for energy look to be sustainable. 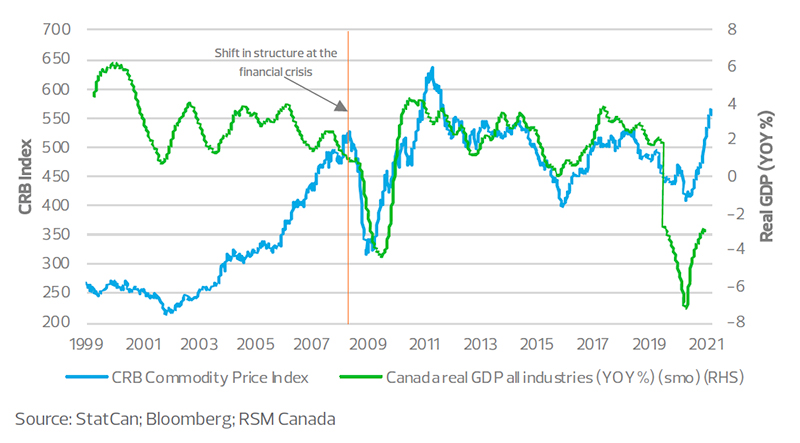 Because of the artificially induced benefits to the nominal value and growth of Canada’s gross domestic product caused by the increase in the price of a barrel of crude oil, we expect the Bank of Canada’s policy to remain where it is.

It will take more than one quarter and one commodity to return Canadian unemployment and inflation back to normal.