I am impressed with how RSM colleagues engage in courageous conversations, whether people are sharing challenges or aspirations balanced against their work and their life goals.
Terri Ellis, Partner
See all current job postings at RSM
Contact RSM
Page Index
Share this

As the U.S. economy goes, so goes Canada's

As Canada has grappled with the human and economic toll of the pandemic, perhaps no measure will have a greater impact on the Canadian economy this year than the passage of the Biden administration’s $1.9 trillion stimulus and relief package.

That’s because Canada’s economy is highly dependent on the fortunes of its far larger neighbour to the south. Without a strong American economy, Canada will have a hard time emerging from its economic doldrums.

Buoyed by government spending and aggressive monetary policy, the Canadian economy has recovered nearly 90 per cent of the economic output lost as a result of the pandemic, setting the stage for what is expected to be the fastest rate of growth in a generation. 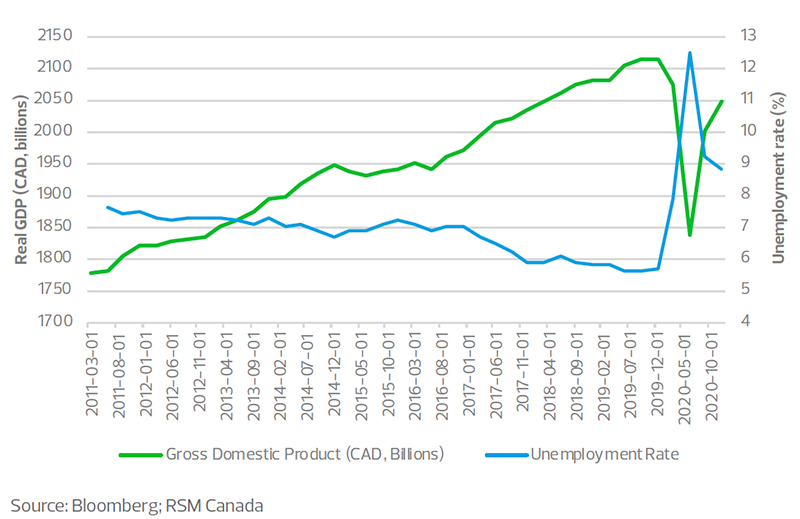 Canada unveiled what some have called the largest economic stimulus program since World War II to combat the virus and cushion the blow from locking down the economy last year. The federal government is about to announce a new budget in the coming weeks (the first in a year and a half), and is expected to announce further measures to accelerate the recovery.

But it is the American Rescue Plan that, when combined with Canadian relief efforts, will lift the economy out of its slumber. The payments being sent directly to Americans will unleash consumer spending, which in turn will fuel a robust expansion this year and next. The Canadian economy will benefit as a result. The diagram below shows the strong relationship between consumer spending in the United States and economic growth in Canada.

Roughly 85 per cent of the $1.9 trillion in the American Rescue Plan is dedicated to addressing the pandemic. As the pandemic goes, so goes the economy. About 75 per cent of the overall package consists of one-time spending and nearly $1.16 trillion of it is designed to be spent this year. Inside that, roughly half of the $680 billion in income transfers this year will be in the form of stimulus checks.

All of this stimulus spending, coupled with an accommodative monetary policy, is why we upgraded our growth forecast for the American economy this year to 7.5 per cent, up from 6.1 per cent, with the real possibility of growth that is faster than that. It will be the fastest economic expansion since the 1980s, and perhaps since World War II.

Canada can expect a similarly strong trajectory. As the American economy improves, U.S. businesses will need to import more energy from Canada to fuel their factories and American businesses and consumers will buy more goods and services from Canada. It is all part of the benefit—and the drawback at times—of being one of America’s largest trading partners.

For this reason, we now expect economic growth this year to be 6.5 per cent in Canada, which is less than that in the United States partly because of Canada’s slower vaccination rate. Risks to our outlook include the potential reinstitution of lockdown measures as a result of a third wave of the coronavirus and lagging vaccination rates.

The other risk is related to fiscal policy. Some commentators have suggested that it is time for the federal government to rein in fiscal spending. But given the potential for the reinstitution of lockdown measures, this may not be warranted.

A big question, though, is to what extent Americans will spend their stimulus checks, as opposed to saving that money or paying down debt (which could foreshadow more spending later).

An initial assessment by the National Bureau of Economic Research found that Americans spent 40 per cent of the one-time $1,200 payments provided under the CARES Act last spring; the rest was saved or used to pay down debt.

But the savings of American households have since swelled and their balance sheets have improved, leaving them flush with cash just as they are itching to return to a normal life—and spend.

There is also the question of job losses, and to what extent the cash flowing to Americans will be offset by unemployment as the pandemic continues and economic activity is curtailed. As scarred as the labour market is, we project a period of significant hiring in the second half of the year as vaccines are distributed, businesses reopen and consumers open their wallets.

It all goes to the confidence of American consumers, who account for about 70 per cent of American gross domestic product. As the prospect of herd immunity from the coronavirus becomes more real, this confidence is poised to grow.

In Canada, the economic mood as measured in the Nanos Economic Mood Index hit its highest level ever, signifying that Canadian households are optimistic about the state of the economy and the recovery. Household spending, which is yet to fully recover from the pandemic, is poised for significant growth over the next couple of years. 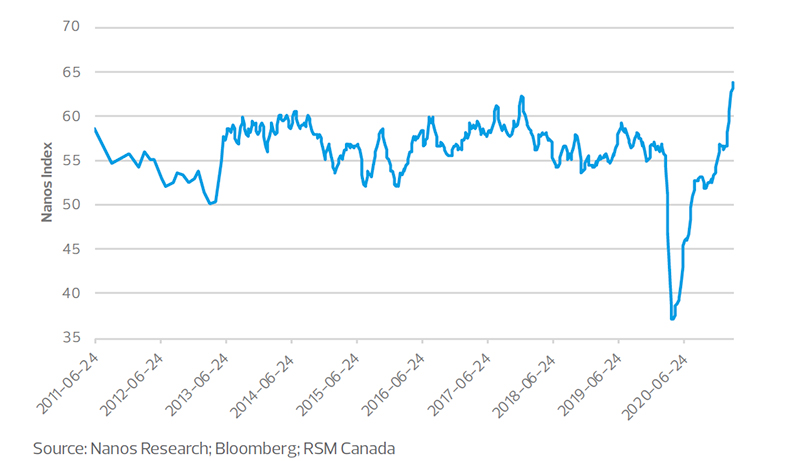 While we do expect inflation in Canada to increase toward 2.75 per cent in the top-line consumer price index in the middle of this year, mostly because of year-ago base effects linked to the recovery in oil and energy prices, we expect that increase will be transitory.

In our view, the top-line inflation number will ease back toward 2 per cent. We do not anticipate a permanent increase in the price level nor a change in inflation expectations that result in higher inflation or any significant risk to the economic outlook linked to pricing.